Allan Cropper Honored As Middle’s Employee Of The Month 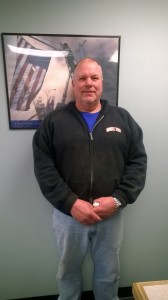 The Middle Township Committee will honor Allan Cropper as the January 2015 Employee of the Month at its next meeting, to be held January 21st at 6 p.m.

“Allan’s energy and ‘can do’ attitude set a great example for all our employees,” Mayor Tim Donohue said. “He’s the type of person who sees what needs to be done and just does it. He takes great pride in his work and motivates his crew to do the same. He’s setting the bar high for our Employee of the Month Program in 2015.”

Cropper began his career with the Township’s Public Works Department in January 2003. He has been a resident of Cape May Court House for over 25 years, having moved here following his service in the U.S. Coast Guard. Cropper states that he truly enjoys coming to work each day and that the best part of his position is “the satisfaction that comes with seeing a project completed.”

Married with two children, Cropper serves as a volunteer with the Stone Harbor Fire Department. In his spare time he enjoys dirt bike racing, camping, fishing, hunting, and spending time with family and friends.

Nominations for the Employee of the Month Program are available inside Middle Township hall at three locations: Human Resources and Training Department, Administration Department, and on the bulletin board. Residents from the Township who have had a very positive interaction with any Middle Township employee may pick up the one-page nomination form and fill it out in the employee’s behalf. Each month a Township employee will be selected; the winning nominee will receive a certificate at a future Township Committee meeting along with a photograph posted on the bulletin board.