Kendra Karstens Honored As Middle’s Employee Of The Month 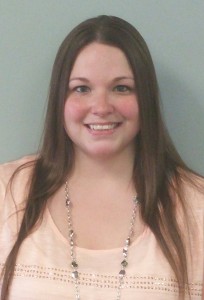 Tonight at its 6 p.m. meeting, the Middle Township Committee will honor Kendra Karstens as the April 2015 Employee of the Month. Karstens serves as Supervisor of the Police Records Department as well as Secretary to the Chief of Police.

Karstens began her career with Middle Township in February 2006 as a Police Records Clerk. In August 2007 she became the Major Crimes Unit’s secretary, and she became the Police Chief’s secretary in March 2013.

“Kendra is the unsung hero of the MTPD,” Mayor Tim Donohue said. “Her professional and serious approach to this important job never wavers. Her service to the Chief and his fellow officers is a key component in making the MTPD one the best run departments in the state.”

“Kendra is a true professional,” said Police Chief Chris Leusner. “Her commitment to the job and the quality of her work is an example for all of us to follow. We are lucky to have her as member of the Middle Township Police Department. “

Karstens refers to her co-workers as “wonderful” and cites them as her favorite part of her job. As far as job duties, she said she likes classifying offenses for the Uniform Crime Report, and particularly enjoys working on projects that require creativity, such as promoting National Night Out.

Police Captain John Edwards said, “Kendra is very knowledgeable. She’s a hard worker and never complains. We jokingly refer to her as ‘The Boss,’ because she consistently gets so much done.”

A resident of Green Creek, Karstens is the proud owner of two cats and “a very spoiled Yorkshire terrier.” She is a self-proclaimed animal lover. In her spare time, she enjoys traveling, reading, practicing yoga and going to the beach.

Nominations for the Employee of the Month Program are available inside Middle Township hall at three locations: Human Resources and Training Department, Administration Department, and on the bulletin board. Residents from the Township who have had a very positive interaction with any Middle Township employee may pick up the one-page nomination form and fill it out in the employee’s behalf. Each month a Township employee will be selected; the winning nominee will receive a certificate at a future Township Committee meeting along with a photograph posted on the bulletin board.